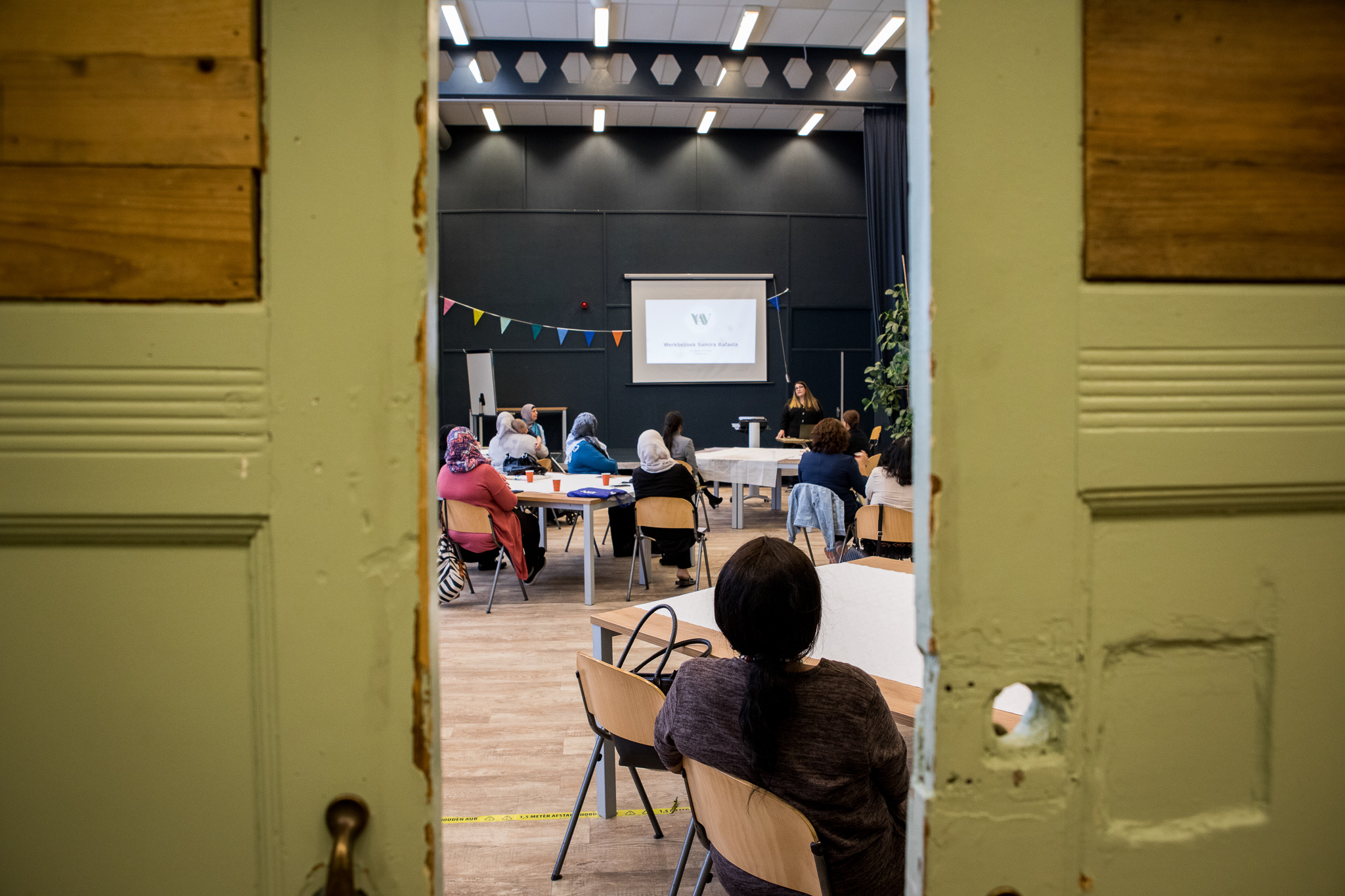 VOAW can be characterised as a grassroots organisation. The foundation is ran by
refugee women and is based in the Netherlands. Its foundations can be found in the feminist activist work done by Jamila Talla. Talla has done feminist activist work for 25 years, of which ten years in Afghanistan and 15 years in the Netherlands. The trajectory of Talla and consequently of VOAW is an interesting and unique one. Where Talla had once been a project financer, working for and developing feminist projects for Unicef in her native country, Afghanistan, she found herself on the other side of the coin, when she had to flee Afghanistan in 1998. Arriving in the Netherlands as a refugee she had now found herself facing a different reality. Her role had shifted from independent to being dependent. In this regard, Talla notes: ‘Now I have become the target-group.’

Talla did not leave her activist nature behind in Afghanistan, instead, she was determined to make the best of her newfound reality and to create a place for herself and those like her in Dutch society. Talla quickly endeavoured to learn Dutch and reached out to local NGO’s and community centres, to find activities which she could partake in. Due to her own background as a developer of feminist projects, she realised the importance of activist participation in society, even if it was a society that was new to her. She did not think only of herself whilst on this journey. She quickly reached out to local NGO’s in the Netherlands and government institutions to propose activities for women of the Afghan community. Her own previous experience as a project developer and her current lived experience of being a refugee and the subsequent obstacles she faced, enabled her to have a deep understanding of the issues women in a similar position to her might face. It furthermore left her with an understanding of how these issues could be tackled. Soon, Talla was organising events and developing projects for local NGO’s aimed at supporting Afghan refugee women that faced various social and economic obstacles and who did not have a network in the Netherlands. In 2010, after years of voluntary work, together with her daughter, Tahmina Ashraf and her friend Nafisa Kohistani, Talla was able to establish foundation Voice of Afghan Women which gave a formal home to all of Talla’s projects, activities and endeavours. As the years have progressed, the reach of Voice of Afghan Women has extended beyond the Afghan community. In June of 2020, the foundation changed its name to Voice of All Women, to ensure that the name of the foundation reflects their broader reach.

Now, on the other side of the coin, Talla gets to develop projects from a bottom-up approach, aimed at engaging women that are similar to her, and who might have once found themselves to have been reduced to subjects of various policies but never considered as active agents, engaged and willing to create their own reality. As mentioned, Mohanty states,

Talla’s background and lived experience and that of the many workers and volunteers at VOAW enables them to see those individuals and groups that lack certain privileges. Groups and individuals that might otherwise be overlooked by more larger organisations, that lack the knowledge and expertise, which is gained through lived experiences. VOAW especially aims to help marginalised women, that due to an intersection of various social categories and processes, find themselves reduced to the margins of society and subsequently face many social, economic, and legal obstacles. Thus an intersectional approach plays a crucial role in the work of VOAW, which aims to help women who are oftentimes overlooked and whose particular set of intersections and the ways in which these intersections might impact them are equally overlooked.

Much debate has existed around the term intersectionality and the way in which it should be defined. Though originally coined by Kimberlé Crenshaw to describe the complex ways in which race and gender intersect and consequently may lead to the discrimination of black women, in particular, intersectionality is now used in broader contexts to describe various ways in which the intersection of varying social identities may lead to the marginalization of certain groups (Crenshaw, 1989). Crenshaw (1993) notes that the focus on various intersections emphasises the need to account for multiple grounds of identity when considering how the social world is constructed (p. 1245 ). This approach is central in the work of VOAW. They don’t solely focus on gender-related aspects. Instead, as Matsuda
(1991) suggests, they ask the other question such as questions around class, disability, illiteracy, culture, language barriers and so forth. VOAW thus seeks to understand the various grounds of identity that may exist and that may inform one’s experience in society (Matsuda, 1991, p. 1189). This enables VOAW to seek out women who live in the margins of society or in closed societies and that are often overlooked or not reached by other institutions and organisations. Just some of the examples that Talla notes, of the women that VOAW is able to reach, are: women without a social safety net, women that have been traumatised, women that have faced issues pertaining to discrimination, isolation, gender-based violence, or harmful cultural practices.

Much debate has existed around the term intersectionality and the way in which it VOAW specifically reaches isolated women from closed communities that often times have difficulty reaching out to formal institutions or professional organisations for help or support. The causes for this vary. According to Talla, some women have a distrust of these institutions due to their previous experience with formal institutions in their country of origin. Other women face a language barrier or feel prohibited from speaking on certain issues with outsiders due to cultural pressures surrounding concepts of shame and family honour. In these instances, VOAW functions as a bridge between these women and institutions. VOAW lowers the threshold and removes the barriers that would normally prohibit women from marginalised communities from asking for help or support. VOAW furthermore pays attention to refugee women. Talla notes that in the experience of VOAW, refugee women are oftentimes isolated. Their trauma’s and the subsequent symptoms are often times overlooked or not recognised. Consequently these women do not receive the appropriate help or care and their symptoms worsen overtime. Furthermore, their isolation can exacerbate the symptoms of their trauma’s.

In this regard, Matsuda (1991) notes the importance of not solely applying an intersectional analysis done from a top-down perspective. Instead Matsuda suggests that intersectional analysis should be done from inside a structure of subordination to prevent a misunderstanding of the particularities of that structure (p. 1191). As Talla has indicated, this is very much in line with VOAW’s bottom-up approach. The very foundation of VOAW and Talla’s work lies in the positionality of Talla and other members of VOAW’s team who have all found themselves, in various ways, relocated to living in the margins of society. It is a form of place based activism (Boggs, 2000) involving what Dirlik (1999) describes as place consciousness. Namely activism which concerns itself about the health and safety of people and places. VOAW seems to have an understanding of the central roles that women play to the life of neighbourhood and communities and thus the subsequent leadership position women take in social struggles (Boggs, 2000). Thus what characterises VOAW is that through their projects, they enable a form of collective resistance that women in different communities enact in their daily lives (Mohanty, 2003, p. 508). Their projects are aimed at increasing the agency of women from marginalized groups, and does not reduce marginalized women to subjects but makes them active agents. Through methods such as Popular Education1, VOAW’s projects encourages people to come together concerning common, local experiences and subsequently to organise their hopes for the future of their communities and cities. Though VOAW is committed to advancing the rights of women from marginalized communities they don’t only target women with their projects. Instead, VOAW chooses a more integral approach and understands the role that men play in the emancipation of women as well.

Today, VOAW finds itself facing the consequences of Covid-19. Talla notes the importance of a gender-inclusive Covid-19 recovery response by the international community and by local governments and institutions. It is of furthermore importance to pay attention to marginalized groups when developing a Covid-19 Recovery Response (Gender Concerns International, 2020). Marginalized communities and specifically women from marginalized communities have been especially affected by Covid-19 and the subsequent measures. Pre-existing issues have been exacerbated by Covid-19 consequently, VOAW has been faced with an increase of their activities. As a result of Covid-19 and the subsequent measures, Talla notes that there is an increased demand for their help, services and guidance. According to Talla, an aspect that is currently being overlooked by governmental organisations and institutions, is the side effects of the current measures on specifically women refugees, who are now faced with their unhealed trauma’s and suffer from symptoms relating to post-traumatic stress disorder. Other organisations such as the knowledge centre Pharos note the same development of an increase of post-traumatic stress amongst refugee communities
(Pharos, 2020).

Furthermore, according to the Central Bureau of Statistics, the relative excess mortality was higher among people with a migration background (compared to people with a native Dutch background). In this regard, Movisie, the national knowledge institute which offers a
comprehensive approach of social issues, in cooperation with other migrant and refugee organisations, has indicated the vulnerability of these groups due to factors such as poverty and language-barriers. They therefore emphasise the importance of cooperation between
municipalities and key figures or organisations from migrant and refugee communities in order to more effectively reach these groups during this period (Movisie, 2020). Organisations such as VOAW are crucial in this regard as they are able to reach isolated communities and can function as a bridge. Alongside their regular activities, VOAW is currently running three Covid-19 projects that target marginalized communities.2 Through these projects, VOAW aims to educate marginalized communities on Covid-19 and the subsequent measures and to mitigate the effects of the Covid-19. In this respect, VOAW has for instance established a helpline via key figures in varying marginalized communities, to provide help and assistance for women facing domestic violence. They have provided families with food and care packages, and they have applied for financial aid funds for low income families that are struggling as a result of Covid-19 and the subsequent measures.

It is not clear what a post Covid-19 world will look like. However, what remains clear is that governments need to ensure that their Covid-19 recovery responses do not violate human rights, do not exacerbate existing inequalities and do not lead to new forms of inequality. Thus far, the response to Covid-19 by governments and the international community, has failed to be inclusive and has led to the violation of human rights in many places. In this regard CIVICUS has issued a statement urging governments to implement any Covid-19 measures within the context of the rule of law (CIVICUS, 2020). CIVICUS’ statement reads: ‘’’

“All responses to COVID-19 must be evidence-based, legal, necessary to protect public health, non-discriminatory, time-bound, and proportionate.”

The statement further reads that gender perspectives need to be applied in policies relating to the COVID-19 pandemic and that such policies need to be inclusive and effectively protect against discrimination on any ground and thus to ensure that no one is left behind (CIVICUS, 2020). To ensure that no one is left behind as a result of Covid-19 recovery responses, the role of organisations such as VOAW will be crucial to mitigate the gendered impacts of Covid-19 on women from marginalized communities. In this regard, VOAW endeavours to continue their legacy of place based activism and strives to continue to give a voice to women from marginalised communities.